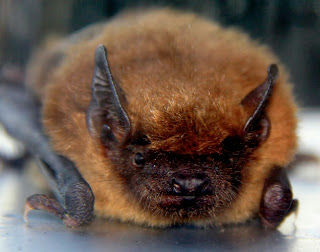 There we were, second story on a ladder leaning against a 150-year-old farmhouse. Just starting this full-exterior job, our first task was to remove the shutters. Now, this being daytime, and this being rural PA and home to the brown bat, we were hoping to see lots of them. And if not the bats themselves, then at least the guano, and lots of it. (If you, like my wife from New York City, don’t know what guano is, it’s poop.) But, as we expected, the shutters were all but bare. One by one, off came they came – close to 40 – and only two bats were rousted from sleep. The thing is, you either find lots of bats on a house…or none because the environment isn’t right for them – the spacing between shutter and structure might be too great, for instance. But still too early for hibernation, I was saddened to see evidence of the deadly white nose syndrome, which has nearly wiped out our little brown bat population, some estimates citing 98 percent of our most common flying mammal! According to some of my bat pals (experts in the “field”), while thousands of our local bats used to hibernate in the Durham Mine (the second largest hibernaculum in the U.S.), there were only a handful this past spring when they returned. 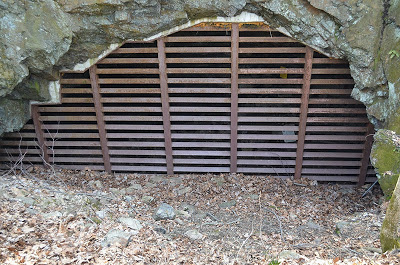 We also have three migratory species here in PA: reds, silver-haireds and hoarys, which go south; although reds might stick around and hibernate in leaf litter. But the march, or rather, flight back of the little brown bat will be very slow, with not enough bats to easily find each other and reproduce, which puts our crops – and us – in danger, as bats eat harmful insects.

Anyway, when I decided to write this blog, my former-city-dwelling wife – who had a bad bat “experience” when she was a kid – shuddered. “I was attacked by one,” she said. To which my bat friend replied, “They don’t attack people, but may come into contact with hair if an insect has landed on your head.” “Ich,” she said, and shuddered again. “And what kind of picture will you post? They look like vampires.” 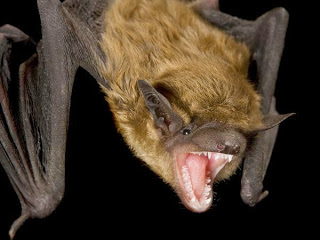 Well, this isn’t the most flattering angle. Most of these types of bat pictures of are them in flight, I explained, when their mouths are open in what’s called echolocating (using their sonar to “see”), but in repose, they are actually quite cute. See.

And they love to be petted.< 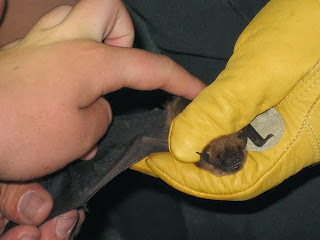 And they purr? “Like a cat?” my wife, who is a cat-lover, asked. Yep. And frankly, I think bats are way cuter than say…

So keep good thoughts about our little brown bats. And hope they get some better PR when they make their return. 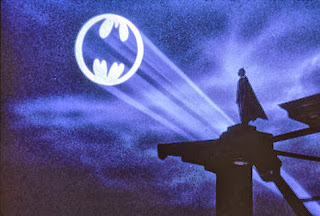