You think they’re called the “Dog Days” because you sit around in the heat, practically panting. Well yeah, but the origin of the term is astronomic: The period between July 3 and August 11 is when Sirius, the Dog Star, rises the same time as the sun. So as we bid “Farewell” to the Dog Days of 2015, say “Hello” here to Sampson, Jake and Farley, Seti and Tyra, Atlas, and M. Claude (he is French). Hope you like the pictorial of Odell Painting’s favorite summer pupstomers! 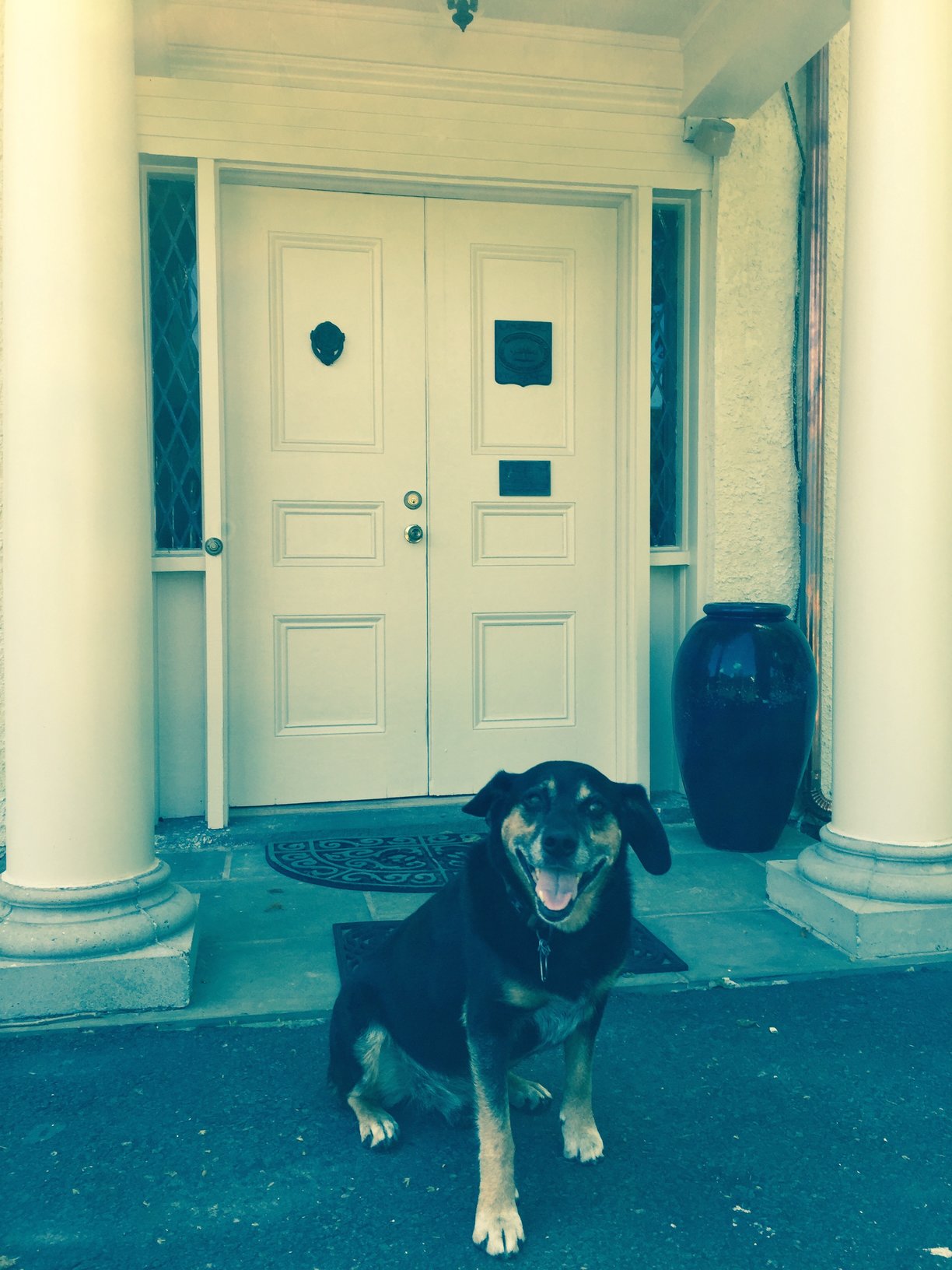 We wanted to photograph Sampson as early as possible in the day because he gets rather busy, patrolling the sprawling estate of the Burpee Company’s historic farm and national historic district, where we are painting the exterior (and some of the interior) of the farm’s Inn. Sampson, 8, who belongs to Burpee Chairman and CEO George Ball, is an SPCA rescue. A mix of Rottweiler, Lab and Beagle, he loves to hunt (although he doesn’t catch anything). You may get a chance to meet Sampson if you attend the Farm’s Open Day on August 15. There will be lectures, exhibits…and food demonstrations! Admission is free. 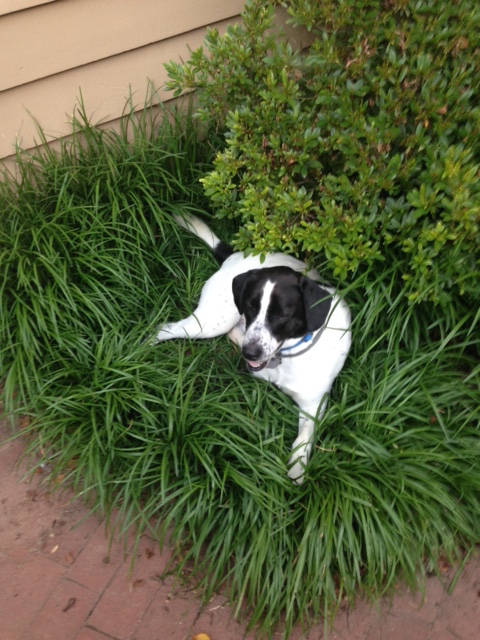 Look up “mischief makers” in the dictionary, and there they are. Farley, right, tends to be the instigator much of the time, but Jake occasionally gets the upper paw. These Border Collie/Lab brothers, who survived the deadly parvo virus, were introduced to their humans, Jay and Dawn Nurney, when the 3-month-old pups were transported from Alabama to Pennsylvania, thanks to a rescue team. We’ve been working on the Nurney property on and off for years, on both the interior and exterior. Now if only these two (the dogs, not the Nurneys) could pick up a paint brush and help. 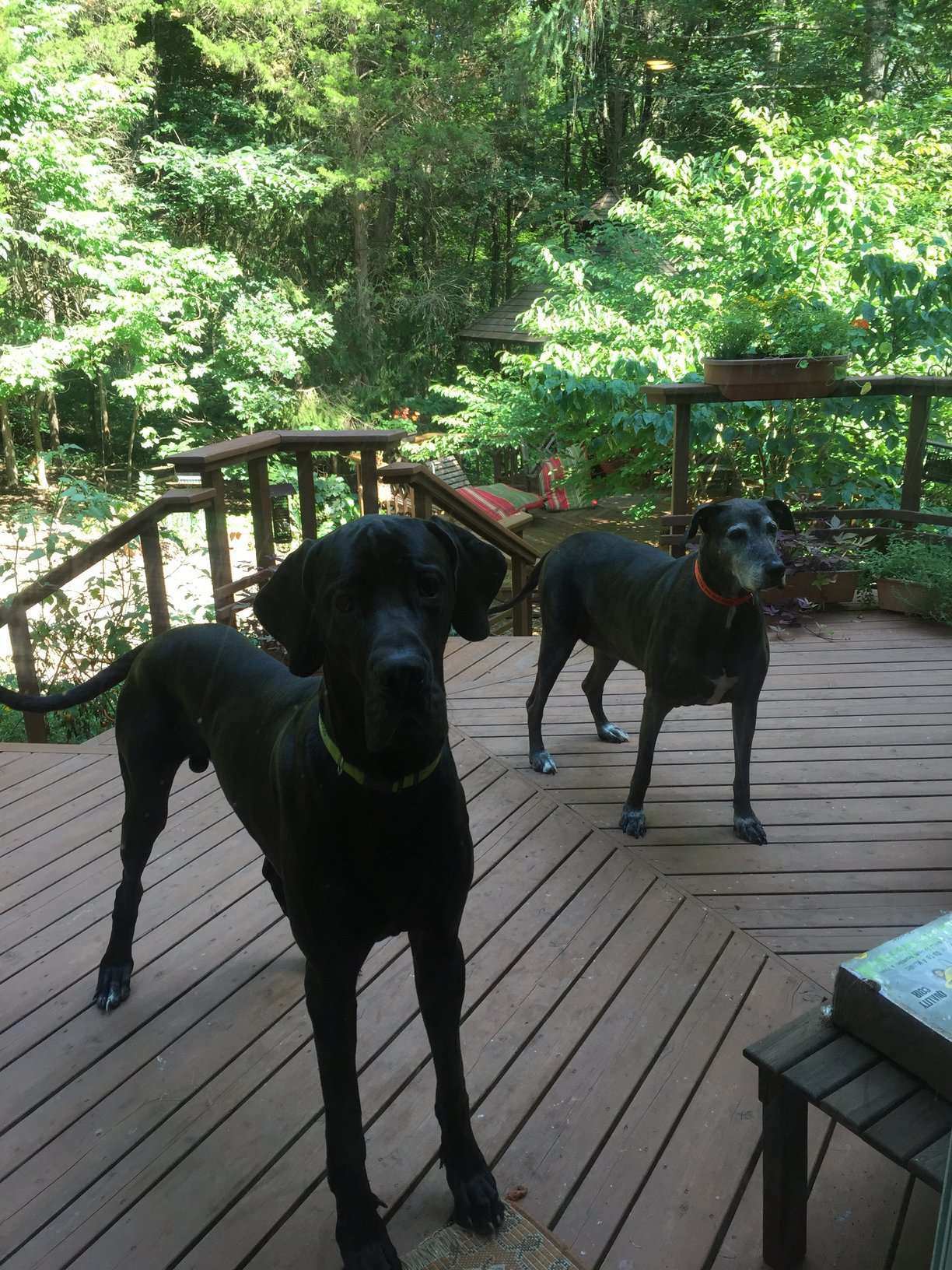 Here are Seti and Tyra on a back deck we stained earlier this summer. Almost 9, Tyra, right, was a rescue, and these days loves to sleep and take walks around the property. Ohio-bred Seti, who’s only 15 months old, stands nearly 40 inches on all fours. He likes to walk in Frenchtown, talk to people and other dogs – and have his picture taken, says mom Martie Kyde. Aside from both being Great Danes, they have something else in common… 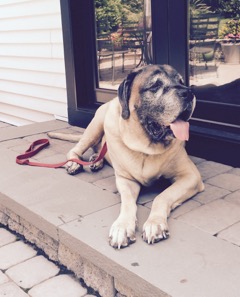 He’s 161 pounds of American Mastiff, and whimpers if you leave the room without him. Also Ohio-bred, this 8-year-old likes to eat and be close to the people he loves. Sounds like a perfect lifestyle. When we were in the thick of the interior job, his mom, Julie Waters, was afraid Atlas was getting in the way. Because when Atlas sits around the room, he sits…around…the room. Ba-dump-bump. 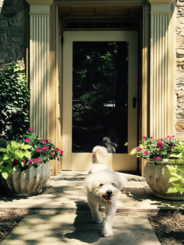 We first met le monsieur a few years ago when we painted Chris and Hal Taylor’s historic Durham home. We reacquainted ourselves with the 11-year-old, 35-pound (!) Bichon Frise – who was rescued from a circus! – when we went out to take a look at the Taylor’s barn last month. True to his heritage, Claude is a lover – even of cats! And even though the barn isn’t a project till spring, we wanted to include Claude because, well, he is the prototype of the dog we had long wanted to share our home with. …Which we now are.

Meet Darian Merolla Odell, the newest member of our family. She is a 6-year-old Bichon and, no, we did not do that to her ears and paws. She was surrendered first to a groomer, who thought a little “paint job” was in order. But the groomer, unable to meet the costs of some surgery Darian needed, in turn surrendered her to the Burlington County (NJ) Animal Alliance, and we found her through Petfinder. We met Darian on July 30 at the Mount Laurel, NJ, Petsmart (pictured below) and three hours later she was sitting on our couch (pictured above). We are in puppy love.

We’ll see you in September!
-Carla, Ken and Darian