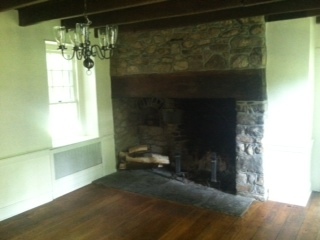 04 AugThe Story of a House (a Love Letter)

The first time I went to the house, in 1993, I nearly missed the driveway. But as I turned off of Route 413 in Buckingham and stepped out of my truck, I truly felt as if I’d crossed a threshold in time, my feet firmly planted in yesteryear before an imposing stone house standing like a sentinel to a property that yawned to the acres beyond. In the ensuing years, I worked on and off for the family – some large, some small jobs – growing quite fond of Judge Isaac Garb and his wife, Joan, as well as of their grown children, Maggie, Charlie and Emily – with whom I mourned the passing of, first, their mother in 2009 and then of their father three years later.

One of the last jobs I did for them was putting in and painting a new handrail on the grand center stairway for Mrs. Garb as movement became more challenging. After that the Judge brought me in to do some small handyman work, ending the day by sharing a cup of tea before I departed. But as is often the case, as children have moved on and parents have passed on, there comes a time to sell the family house. It’s not hard to find the turn now; a Mazaheri Realty signs marks the drive.

I want to tell you about this house, and its family. And why a particular spot on their property provides me with a warm and loving memory.

First, the house. Maggie provided a bit of published history: The oldest part of the house dates back to about 1740. The newer rooms – the front hall, two living rooms and large bedroom – were completed around 1810. Its Federalist-style façade and elegant front door with Palladian window were typical of stone houses built in the first-quarter of the nineteenth century. The house’s large, gracious entry hall, however, is unusual, a sign of the prosperity—and perhaps social ambition—of its early owner [Joshua Anderson]. …The house remained in the Anderson family…[and] changed hands just once in the mid-twentieth century before Judge Isaac and Joan Garb bought the property in 1966.

“I was only four, but I remember coming into the house for the first time,” Maggie told me. “It was dark and scary and Mom took down the heavy dark curtains and brightened up the house. They particularly liked the location because my father was now a judge and he wanted be on a major road so he could get into town and never be stuck when there was bad weather.”

So here’s where I tell you about the Judge. If you’ve lived in the county for a time, his name might be familiar. He presided over the infamous “Mainline Murder” case where William Bradfield was found guilty of murdering Upper Merion schoolteacher Susan Reinhert and her two children. He was also the judge who ruled in favor of the much-needed Point Pleasant pumping station – an issue over which environmental protestors, including Abby Hoffman, were jailed and over which the Judge received death threats. As it turned out the pump had no effect on the river.

Last, I’ll tell you about why a particular spot on the property is so important to me. Early in my business, I worked with a very close friend. We called him – and you can see why in this photo – “Big Michael.” Here we are in front of the Garb barn in 1999, our last job together. A few weeks later he was diagnosed with a fast-growing cancer and gone a month after that. 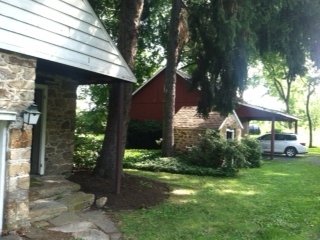 We loved spending our lunchtimes, sitting behind the barn and stone guesthouse, which I believe was the original kitchen house.

…near the tree swing where long-ago children pumped their legs back and forth, and where I one day watched Michael, climbing higher into the summer air.

Until the house is sold, Maggie is living there, and I’m helping with the little things the house needs as it waits for its next owners, families who will gather around the dining room table in what is the oldest section of the house to celebrate holidays together and perhaps throw a wedding or two, as the Judge and Mrs. Garb did for their daughters. “Of course we wanted to be married here,” Maggie says. “There’s a magical quality to the house; we could feel it as kids.” 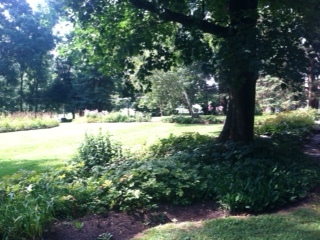 I feel that magic every time I return there. So early in July, I asked Emily if we could take some of the plantings the Garbs so lovingly tended all those years. Carla and I spent a morning, walking much of the property – which backs onto 50 acres of preserved open space – gently digging out and wrapping ferns, morning glories, and bleeding hearts, which have taken a liking to our soil, about 15 miles north. A little bit of what was there is now with us, growing and thriving. As Maggie remarked the last time I was there, “This house carries all the lives that were part of it. Now we’re all part of its story.”

In one way or another, all things endure. 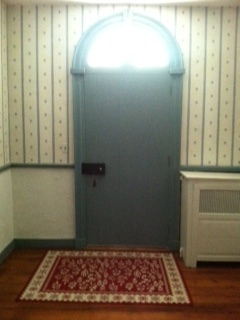