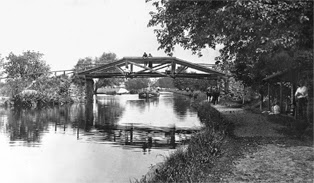 24 JunWith a Little Help from Our Friends…

My wife, Carla, and I love to walk on the Delaware Canal Towpath, especially near Upper Black Eddy, close to where we live. For those of you not familiar with the walking/biking/jogging/occasional-horseback-riding stretch, this is the 60-mile terrain along which sure-footed mules once towed barges carrying goods between Easton and Bristol. For a long time, every time we walked under the iconic camelback bridge near us, we’d duck. Partly because our height perception was off and partly because we were nervous it would collapse on our heads (as if ducking could protect us.)

Okay, we weren’t really worried. But the truth is the authentic camelbacks—dating back to the Canal’s heyday pictured above (circa 1920)—have been in much need of repair. Once there were more than 100 bridges spanning the Canal, most of them camelback; only six true camelbacks remain today, four of which have been restored thanks to the combined efforts of the FODC (Friends of the Delaware Canal) legislative initiative grants, the “Save America’s Treasures” program, and the Heritage Conservancy.

Anyway, two years ago Odell Painting became a Business Member of the FODC because we wanted to do what we could to preserve the integrity of the Canal (which in turn protects its flora and fauna) and to help perpetuate its folklore. And being in the building-and-remodeling industry, it just made sense for us to join the CAT (Canal Action Team). In May, thanks to contributions, structural repairs to the cross bracing system were completed and deteriorated materials were replaced on Upper Black Eddy’s Hazzard’s Bridge, the fourth of the six remaining bridges, the one we were ducking under all the time–and whose “adolescence” is captured in the photo that opens this blog. 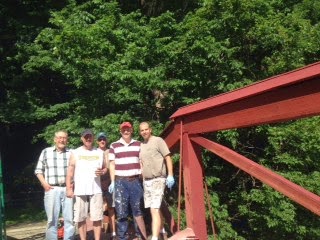 Not being engineers, a Lancaster construction team, experts in camelback structures, did the big work. But in mid-June, CAT members Brian Dougherty, Josh Gradwohl, Gordon Heisler, Peter Sperry, and I finished the job: scraping, priming, and repainting the trusses its customary red.

This past weekend, Carla and I went for our walk–and beneath the bridge, held our heads high. But there are two more bridges waiting… If you’d like more information about the Canal’s history and long-ago culture, what the Friends do, and possibly joining us, please visit www.fodc.org.

The top photo is reprinted Courtesy of FODC, and the middle one is by Brian Dougherty. The last one is ours; we used a timer.